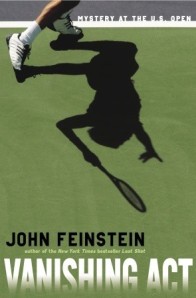 Vanishing Act, by John Feinstein, is a thrilling adventure at the U.S Open. Vanishing Act is the story of a group of teenage sports writing friends who plan to spend a vacation watching the grand slam in New York. They were having a great time at the Open, until the big event happens.

When they are planning to watch their favorite tennis player, Nadia Symanova, a news topping event occurs. Minutes before her showtime, she disappears, a vanishing act. This leaves millions with the question, “What happened to Symanova?” Once this group of friends discovers this event, they must use their friendship to solve this crime.

This book was written with a lot of suspense, and flowed very smoothly. The author had a great perspective in which he wrote it, with a lot of voice.  He made the characters seem real, and made it feel like you were in the story.

I would highly recommend this book to people who enjoy an adventure, tennis, and love a great story. This story takes place at the grand train station in New York. Feinstein makes it so the station seems so real. Along with the thrilling adventure, he ties in the two themes of mystery, and friendship.

The three friends, Stevie, Bobby, and Susan, rely on each other to solve this crime. Also, there are many unexpected twists and turns in this book, “You’re right, she said. But I can’t imagine she would be involved in this.” (Feinstein 226) Vanishing Act is a great mix of friendship, mystery, and a great tennis match for all. 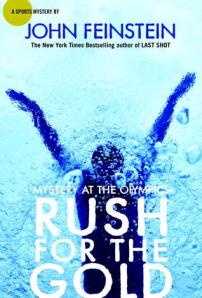 Have you ever had a dream you worked your whole life to achieve? John Feinstein, a fictional sports author, captures an amazing story of a small town swimmer who dreams of someday competing for Olympic gold. John has written over six other sports books, one of them being the New York Times best seller, The Last Shot. In Rush For The Gold, he tells the story of a girl named Susan Carol Anderson and how her life changed dramatically because of just one swim meet. I strongly recommend this book for any type of athlete looking for an inspirational story, as well as a compelling and captivating read. Athletes will love the competitive nature of the story line, and every reader will love the fast pace that keeps you guessing from beginning to end.

The story starts out with Susan Carol having a flashback to the World Championships in Shanghai nine months beforehand when she beat the world record holder, Liu Zige, from China by two hundredths of a second in the final round. From that point on, Susan Carol stunned the world. That win guaranteed her a spot in the Olympic trials and laid out an amazing financial future for her and her family.  “She had gone to China hoping to swim the meet of her life. She never dreamed that succeeding would completely change her life (pg. 2).” This just goes to show that even good things lead to different sorts of change; some good and some difficult.

“It had been at a Grand Prix meet in Charlotte [North Carolina] that she [Susan Carol Anderson referred to as Susan Carol] had gone from being a solid age-group swimmer to a national contender (pg. 5).” After that meet, her life would never be the same. From people at school treating her like a star, press meetings in her free time, to agents coming to her house pleading for her to become their client.  Susan Carol faced all the changes that come with a small town girl becoming an international celebrity.  A major theme projected throughout this novel is change – being able to accept change and adapt to change, both big and small, good and bad. Although it might seem simple, there are many different types of change. In Susan Carol’s case, accepting and adapting to all the changes in her life is no easy task. Part of her being able to adjust was having the support and loyalty of her boyfriend, Stevie.

After making the Olympic team, Susan Carol swims for her life in both the 100 meter and 200 meter butterfly. She can handle pressure well, but will it be different this time with millions of people watching? From here, you will have to read the book to experience all of the twists and turns of her shocking Olympic journey.  Does all of her hard work and extreme training finally pay off?  Do her Olympic dreams come true?

I would have never thought that one of the top seeds in the U.S. Open of tennis would be kidnapped just minutes before her first round match, but in the book Vanishing Act, the unheard of scenario became a reality. Nadia Symanova was kidnapped before her first round match, and kid sleuth’s Stevie Thomas and Susan Carol Anderson are up for the mystery.

The perspective of Stevie was interesting because his thoughts and feelings came to life. Stevie is a youth journalist who attends popular sports events such as the final four which was his last stop. He is a social boy who is a knowledgeable sports fanatic. He mostly enjoys golf, and can never stay away from his IM account, which he mostly uses to talk to his crush, Susan Carol. “He needed a shower, but as usual, he checked his IM first” (8).

Susan Carol, Stevie’s partner in crime, is a kind and energetic youth journalist, as is Stevie, who is very passionate about sports. Her uncle Brendan Gibson is an agent of one of the rising stars in tennis Evelyn Rubin, but is Brendan working with other tennis players behind Evelyn’s back… You will just have to pick up the book and see.Bobby Kelleher, Stevie and Susan Carol’s journalist friend from their last stop at the Final Four is at the tournament. Bobby gets into all of the players lounges and locker rooms, and that might be very helpful after the crime.

I believe that “the sky is the limit” is the major theme of this book because, Stevie and Susan Carol are both 13 and they are nationally identified as two of the greatest youth sports journalists in America. They worked hard on something they enjoyed and it led them to fame.

Even though this book was a fictitious sports mystery I believe there was a moral. The moral being if you want to do or finish something, put your mind to it and make the dream a reality.

Even for those who do not enjoy tennis, this book is a mysterious nail biter. It isn’t a book you can put down without finishing it.

John Feinstein is a sports writer and commentator and has written many fictitious sports mysteries. He incorporates some of the books he has written in the Vanishing Act, which is an unusual writing tactic.

I give this book 5 stars, there were no flaws and everything in my opinion was perfectly explained throughout the book. The resolution really surprised me, and If I were you I would pick up this book right now, find a comfortable chair, and dig into this unbelievable book!