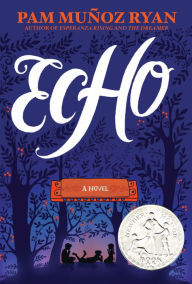 Interwoven by a single object, the three lives of children are forever changed by magical harmonica in the novel Echo by Pam Muñoz Ryan.

The story begins with a young boy named Otto, who meets three sisters when he gets lost in a forbidden forest. Interacting with them, Otto realizes the mysterious nature of them. The sisters guide him home, and give him a harmonica with a special “M” seal. The harmonica makes its way to a young boy named Friedrich in Germany.

Hitler is rising, and the Nazi’s party influence is very prominent; resistance to it is very difficult. Discovering the special harmonica in the factory his Father works in, Friedrich plays it and realizes there is something special about it. Because of unforeseen circumstances, he is forced to get rid of the harmonica.

It travels next to Mike, an orphan, in Pennsylvania. Constantly taking care of his younger brother, Mike is looking for a break to help himself and his brother out of their destitute lives. Musically gifted with playing the piano, Mike discovers the special harmonica. He and his brother are eventually adopted, but there are some complications with their new guardian. The last child in the novel is Ivy. Receiving the harmonica, her special talent for playing is recognized by her teacher; her teacher chooses her to play a solo in a special concert, but Ivy’s Father receives a job, forcing her to move way. Her Father’s job is to take care of a farm of Japanese family, while they are in an internment camp. The neighboring farms are anti-Japanese, and some vandalize the property. The harmonica helps her adjust to the move. Each of the children’s lives have their own story with the harmonica, but the ending ties them all together beautifully.

Even though this book is intended for younger children, anybody of any age would enjoy this novel because of its simplistic nature and “feel-good” element. My favorite part of this book was how there were multiple stories, and they were told in such detail, that one was able to connect and understand the individual characters. It is also relatable because of the backdrop of the second World War, and how it impacted people differently depending on where they lived. The “magic” element made the novel all the more enjoyable because it captured the innocence of the young children.

I loved Echo, and I would recommend it to anybody looking for a light, quick read.

Echo by Pam Muñoz Ryan is available for checkout from the Mission Viejo Library.

The story of Esperanza Ortega is a backwards Cinderella. Esperanza Ortega lives at a ranch called El Rancho de Las Rosas (The Ranch of the Roses) with her mother, father, and grandmother. Esperanza’s papa owns it until one day before her 13th birthday, Esperanza’s life is shattered when Alfonso and Miguel, servants of Papa, ride home in the wagon with Papa lying under a blanket in the back, dead

The most devastating part of this entire ordeal is that Papa died the night before little Esperanza’s birthday. Tio Louis and Tio Marco, Esperanza’s uncles, come to “grieve” for Papa. Tio Louis hints to Mama that Papa left the ranch to her , but it is not customary to leave a woman in charge of a household. He makes a proposal…of marriage! Mama is shocked and offended. She says no, of course! Tio Louis says that Mama will regret her decision. That night Esperanza is woken by Mama telling her the house on fire.

They finally agree to leave Mexico. It will be the best thing for them. It will be very tough on Esperanza who has never done an ounce of hard work in her life. They devise a plan to hoax Tio Louis. They follow the plan and leave for California. It is hotter, and the living conditions are worse. Esperanza goes through some more ups and downs in California just like her zig-zag blanket that her grandmother is teaching her how to make. At this point in the story, I had thought of the song, “Don’t Stop Believin'” by Journey. It shows that Esperanza needs hope. An interesting coincidence is that ‘Esperanza’ in Spanish means ‘hope’. The reason it reminded me of the song is Esperanza’s life is being torn apart. The line, “Hold on to that feeling,” reminded me that Esperanza needs to keep the feeling of love and the memory of Papa. But, by the end, unlike a backwards Cinderella, she feels rich at the end because she has her family, a roof over her head, and is surrounded by the people who love her.

At the end of the book, if the story were made into a movie, the song “We Didn’t Start the Fire” by Billy Joel should be played. At the beginning of the song, it describes the setting of the story: the Mexican Revolution. Then, as the song continues, more events happen just like Esperanza’s tragic life. But the biggest similarity between the two is the chorus. It says “We didn’t start the fire. It was always burning as the world’s been turning.” which relates that Tio Louis and Tio Marco set the fire in Esperanza’s house and through the rest of the story, there was always a fire burning in Esperanza’s heart where Papa used to be.

I would definitely rate this book a 10 out of 10 for its symbolism and its great literary quality. Esperanza Ortega was a real person, making this book based on an actual event. Esperanza was the author’s grandmother, and she told Pam a little bit of her life story. The rest Pam had to make up based on her grandmother’s personality. This book is also similar to Chinese Cinderella in the sense that they were both called Cinderellas by bullies.

Esperanza Rising is a great novel about a young Mexican girl’s adventure of riches to rags– quite the opposite of most stories.

Esperanza lives on a big ranch called El Rancho de Las Rosas. There she has servants, huge acres of land, her best friends and a mother, father and grandmother who love her dearly. Esperanza lives the life of a princess, she has everything. That all changes on the day that Esperanza pricked her finger on a rose thorn, bad luck was coming. And she was right.

Esperanza’s father promises to meet her in the garden that day, but he never arrives, having been killed by bandits still bent on the Mexican Revolution. From that point on, Esperanza suffers through her uncles taking advantage of her father’s recent death and proposing to Mama, the burning of El Rancho de Las Rosas, the separation from Abuelita (grandmother), the step by step process to becoming poor and the escape from the only home she had ever known. Moving to California to work (although work was never in Esperanza’s vocabulary) is a big step for Esperanza.

A revolution boiling in the background of this new life and Mama’s sudden illness all come as a surprise to Esperanza. Will she be able to save Mama’s life and her own? Is the strength of love and perseverance truly the strongest medicine of all? Esperanza learns to “never be afraid to start over” because our lives are lives of “mountains and valleys.” After all, “he who falls today may rise tomorrow.”