Herman Melville (1819-1891) was one of the greatest American novelists, essayists, and poets of the 19th century, along with Nathaniel Hawthorne. Melville, who received little attention during his lifetime, rose to prominence in the 1920s and is generally regarded as one of the highest figures in American literature. Maugham considered his Moby Dick to be one of the world’s top ten literary masterpieces, ranking higher than Mark Twain and others in its literary history. Melville is also known as the “Shakespeare” of America.

In “Bartleby, the Scrivener”, Melville, through the interpretation of Bartleby’s silent struggle, powerfully responds to the over-optimistic transcendentalist worldview and expresses his own different views. Transcendentalists believe that “god is merciful, and nature is an incarnation and symbol of god, as well as the embodiment of god’s mercy; The soul of man is divine, so man’s nature is good, and he is one with nature.” And for Melville, nothing is absolutely good or absolutely evil. Emerson’s transcendental optimism does not really help the development of individuals in a vast society. The power of individuals is small, unable to fight against the society. Emerson is only describing to us an ideal state of human life, which can never be reached, but a castle in the air, which is desirable but unattainable.

In addition, Melville was deeply influenced by biblical stories. Not only did many of the characters in Moby Dick take their names from the bible, but he was also influenced by the simple ecological views of the bible. In the bible, although nature is god’s tool to punish human beings, human beings have to overcome the harsh natural environment in order to survive outside the garden of Eden, but this does not mean that human beings have to conquer and transform nature in order to survive. In fact, the bible calls for careful control of nature, not unbridled conquest. In addition to giving man the right to rule the earth, god demands that man must protect and nurture nature which espouses most of Melville’s thinking and shaping of plot lines.

The works of Herman Melville are available for checkout from the Mission Viejo Library. They can also be downloaded for free from Overdrive.

Saul Bellow was born on June 10, 1915, and passed away on April 5, 2005. He was born in Lachine, a small village located in Quebec, Canada and immigrated with his parents to Chicago, United States with he was eight. Due to this reason, Hyde Park, Chicago was the backdrop of a lot of his famous works because he was the most familiar with it.

Both of his parents were from Russia and were very strict Jews. They wished Saul Bellow could be a rabbi or a violinist playing in church when he grows up. However, he couldn’t overcome his passion for writing and therefore did not relinquish to these two occupations even when his mother passed away. He went to Chicago University and later switched to Northwestern University because he felt the former disliked Jews and therefore mistreated them. Bellow did his graduate studies at the University of Wisconsin.

As a Novel Prize Literature winner, Pulitzer Prize fiction winner, and the only writer to win the National Medal of arts three times, Bellow in his entire life has composed a lot of works. These include Dangling Man, The Victim, The Adventures of Augie March, Seize the Day, Henderson the Rain King, Herzog, Mr.Sammler’s Planet, Humboldt’s Gift, The Dean’s December, More Die of Heartbreak, A Theft, The Bellarose Collection, The Actual, and Ravelstein. He also wrote a lot of plays and some nonfiction as well.

One thing which marks his unique style is his philosophical views embedded amongst the paragraphs and in characters’ dialogues. It provides on his insight of life, death, marriage and other themes which he values as important. Although some critics argue that this style of approach can be very elusive and a form of digression, I thought if sociology and anthropology are vital in Bellow’s life, he should put it down to let people who he really is.

The works of Saul Bellow are available for checkout from the Mission Viejo Library. 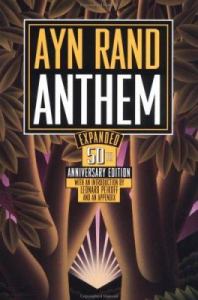 Anthem, a dystopian novel by Ayn Rand, is certainly a unique piece of literature. Described by herself as not a book, but a poem, and with a plot lasting less than 50 pages, Anthem is an ode to Objectivism. Written in 1937, imagined in the Soviet Union, Rand wrote the book in a time of political turmoil, which is reflected in her writing.

The story follows Equality 7-2521, a man who lives in an entirely collectivist society. Forbidden to think individual thoughts or exercise free will, Equality knows that something is wrong with the world he lives in. Since he was a child, he was different than his peers: he was always curious. When it is time for him to be assigned a job, he is not given the job of a scholar, as he wishes, but is sentenced to a life sweeping streets for this essential sin. However, this dark future opens up to light, quite literally, when he makes a revolutionary discovery.

Without spoiling the plot of the story, I can say that the book praises the human ego. Ego seems today to have a negative connotation, like a person obsessed with themselves. It can almost be confused with narcissism. Whatever picture that you have in your mind of “ego”, put it out. In this context, Rand praises man’s control over his own mind, man’s independence, and man’s freedom to learn, be successful, and make choices for himself. As shown in the book, ego is a beautiful thing that society falls apart without. Anthem is the perfect, short read for anybody who wants to have more food for thought than even some average length novels can provide.

Anthem by Ayn Rand is available for checkout from the Mission Viejo Library. It can also be downloaded from Overdrive.

Life of Pi, by Yann Martel, is perhaps one of the greatest books on philosophy ever written, delving heavily into themes of faith and hope, all while telling the exciting story of a boy and a tiger.

The story goes like this: Piscine Patel is a young Indian boy who lives on a zoo. There, surrounded by animals and the beauty of nature, Pi develops a fascination with religion, exploring and questioning every aspect of it. When his family is shipping the zoo across the ocean, a storm sinks the ship. As the sole survivor, Pi is cast to sea on a lifeboat, with only a Bengal Tiger as his companion. While drifting on the Pacific Ocean, Pi survives and slowly creates his own perception of faith and hope.

From the surface, Life of Pi seems like another tale of adventure and survival, much like Gary Paulsen’s Hatchet. However, I personally think that Yann Martel was more writing about the concept of religion. Even the themes of hope and survival are all linked back to Pi’s faith in God, or Gods.

Right from the beginning of the book, Pi establishes himself as an extremely religious person, becoming a devout Christian, Muslim, and Hindu all at once. When the truth comes out, all of his religious leaders and parents push him to settle on one religion. Pi replies, “‘All religions are true.’ I just want to love God” (Martel 69). Whether he is correct in saying this is unimportant, because the purpose is to show the frivolous nature of rivalry between religions. At the same time, he felt that atheists were his “brothers and sisters of a different faith” (28). Of course, when his situation spirals into survival on the ocean, Pi’s faith is shaken, but he finds his own peace with his God.

Life of Pi surpasses an average philosophy textbook because Martel doesn’t monotonously write about philosophical concepts. Instead, he weaves a beautiful story with elements of philosophy introduced alongside Pi’s experiences on the ocean and in his zoo. In this way, the story’s excitement and thoughtfulness work in tandem, each making the other more meaningful.

In conclusion, Life of Pi is a beautifully written book that will leave you questioning your existence without having to endure the boredom of a typical book of philosophy. Perfect!

Life of Pi is available for check out from the Mission Viejo Library. It is also available digitally from Overdrive.