Moby Dick (1819 — 1891) is a long sea novel published in 1851 by Herman Melville, an American novelist in the 19th century. The novel describes the story of Captain Ahab’s pursuit and killing of Moby Dick, a white sperm whale, and his final death together with the white whale. The story creates an atmosphere in which people are exposed to various dangers and even death at any time. It is the representative work of the author. The movie Moby Dick released on June 27, 1956 is based on the novel.

Ahab, captain of the Peron, who, in the course of a whale hunt, was bitten off a leg by the fierce and clever Moby Dick, the white whale, was so intent on revenge that he lost his reason and became a dictating paranoiac. He sailed almost all over the world until he met Moby Dick. After three days of pursuing, he struck the white whale with a harpoon, but the ship was wrecked by the white whale, and Ahab, entangled by the harpoon’s rope, fell into the sea. The whole crew went overboard, and only Ishmael the sailor was saved.

In 1839, Melville began his life at sea, working as a steward on a ship bound for Liverpool, England. Two years later, he worked as a sailor on a whaler, hunting whales in the South Pacific. About a year and a half later, he fled the boat with a good friend and later boarded a whaling ship from Sydney. Unfortunately, he got aught up in the ship’s rebellion and was imprisoned in a makeshift prison. Melville managed to escape and lived in Calabria for months before taking a boat to Honolulu. Soon he became a sailor and cruised the Pacific until he returned to Boston in 1844. Melville’s voyages and adventures became the main material for his early works.

Moby Dick by Herman Melville is available for checkout from the Mission Viejo Library. It can also be downloaded for free from Overdrive.

Herman Melville (1819-1891) was one of the greatest American novelists, essayists, and poets of the 19th century, along with Nathaniel Hawthorne. Melville, who received little attention during his lifetime, rose to prominence in the 1920s and is generally regarded as one of the highest figures in American literature. Maugham considered his Moby Dick to be one of the world’s top ten literary masterpieces, ranking higher than Mark Twain and others in its literary history. Melville is also known as the “Shakespeare” of America.

In “Bartleby, the Scrivener”, Melville, through the interpretation of Bartleby’s silent struggle, powerfully responds to the over-optimistic transcendentalist worldview and expresses his own different views. Transcendentalists believe that “god is merciful, and nature is an incarnation and symbol of god, as well as the embodiment of god’s mercy; The soul of man is divine, so man’s nature is good, and he is one with nature.” And for Melville, nothing is absolutely good or absolutely evil. Emerson’s transcendental optimism does not really help the development of individuals in a vast society. The power of individuals is small, unable to fight against the society. Emerson is only describing to us an ideal state of human life, which can never be reached, but a castle in the air, which is desirable but unattainable.

In addition, Melville was deeply influenced by biblical stories. Not only did many of the characters in Moby Dick take their names from the bible, but he was also influenced by the simple ecological views of the bible. In the bible, although nature is god’s tool to punish human beings, human beings have to overcome the harsh natural environment in order to survive outside the garden of Eden, but this does not mean that human beings have to conquer and transform nature in order to survive. In fact, the bible calls for careful control of nature, not unbridled conquest. In addition to giving man the right to rule the earth, god demands that man must protect and nurture nature which espouses most of Melville’s thinking and shaping of plot lines.

The works of Herman Melville are available for checkout from the Mission Viejo Library. They can also be downloaded for free from Overdrive.

Published in 1851, Moby-Dick tells the story of a man obsessed with hunting a whale, and is considered to be a classic of American Romanticism. The following pieces of mixed-media art were inspired by the text. 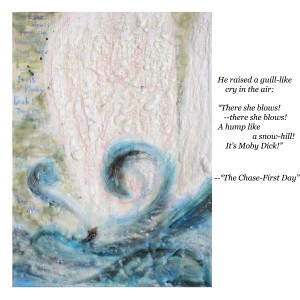 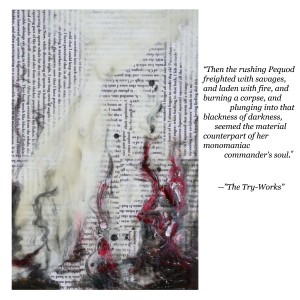