This year for school, one of the required books to read for English was called My Brother Sam Is Dead written by Christopher Collier and James Lincoln Collier. When I first heard we were going to be reading this book, I was intrigued by the title. I thought it was a bit funny to have such an important detail in the title. I wasn’t super thrilled at first when we had to read it for English class but in the end, I enjoyed the book.

My Brother Sam Is Dead is a historical fiction novel that takes place during the Revolutionary War. The story is told by Tim Meeker. Tim Meeker is a young boy who helps his parents at their tavern and looks up to his older brother Sam. Sam Meeker is a college student at Yale and is expected to have a bright future ahead of him. One day, he comes home from college and brings home the news that he has decided to enlist in the army to fight in the war. Not only is he fighting in the war but he is also fighting on the patriots side while the rest of his family and his town he lives in are loyalists. Sam and his father argue and their family is tearing apart. Now Tim must decide who to side with, his brother he looks up to, or his father he has obeyed for his whole life.

My Brother Sam Is Dead uses a lot of accurate historical elements making the story clear to understand. I ended up really liking this book. I was never really interested in historical fiction when I was younger but I guess my taste had changed. The characterization of each character was unique with Tim being unsure of his and everyone’s decisions and Sam being ambitious and righteous. The character development through Tim showed a boy who grew up. At the beginning he was a child but throughout the years, he had to grow up and fill other people’s shoes to help himself and his family.

The characters I really liked were Father and Tim. Father was strict on his kids but there were parts in the book that showed he was still human and he could hurt. He cared about his family and just wanted them to be safe and happy. Tim was childish and wanted to prove himself but as he grew he became like his father filling his role. Tim became independent and successful by the end of the story, and lived his life.

I liked My Brother Sam Is Dead. I hadn’t expected much from this book but I thoroughly enjoyed it. Even though it was a school required book, I had fun reading it and had some slight emotional moments in some parts of the story. I would definitely recommend this book to those who like historical fiction and even to those who don’t.

My Brother Sam is Dead is a historical fiction novel that takes place from 1775 to 1779. This book is all about the Revolutionary War and how it impacted the daily lives of those living in the Colonies. The story revolves around a young boy named Tim Meeker, and his brother Sam. Sam believes in the Patriots and longs for freedom from England, while Tim, being the ripe age of 12, is not quite so sure.

As the story progresses, It becomes painstakingly clear how difficult war makes life for the innocent. With the growing gap between Tim’s father and brother and Tim’s growing curiosity, this gorgeous tale evolves into something deeper than just a book. As the economy falls and hardship after hardship is forced upon the Meeker family, Collier and Collier make it apparent as to how they feel about war.

This story touched me deeply. After I finished, my whole perspective on the war changed, which is what I think the authors wanted. I recommend this book to anyone who is looking for a short but deep read. It is truly astonishing how much a book can impact us.

My Brother Sam is Dead by James Lincoln Collier and Christopher Collier is available for checkout from the Mission Viejo Library. It can also be downloaded from Overdrive. 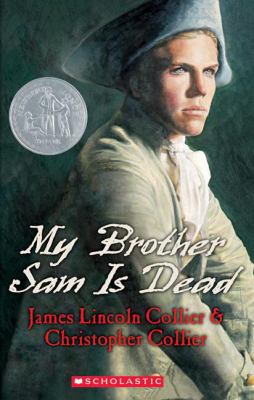 I was assigned to read this in my Social Studies class. Since we where learning about the American Revolution it was a fitting read for this topic.

The book was about Tim Meeker. His brother Sam Meeker was enlisted in the American Revolution. The only problem was that his family disagreed with him. The Meeker’s were Tories which meant they where on the side of the British. The whole story is about how the war affects people.

I thought the first part of the book was a little boring. But just like all great books they pick up in the end. That is exactly what this book did. At the end of the book I realized it was a true story. Most of the things in the story where real.

Early in the book Tim was a young boy. In the first chapter he got so excited when he was going to milk Old Prue which was a cow.  Since his brother did it he thought it was so cool when he saw Sam do it. Of course it wasn’t as cool as he thought it was. I thought this sequence showed how little brothers always look up to there older brothers.

Later in the book Tim was working in the family tavern and sometimes he would get unsurprising visits from Sam. Sam wouldn’t come all the time of course. He would just come once or twice in about two years.

When you picked up the book from the start to end you could really see how much Tim progressed from a child into a adult. You could really see him take charge after his brother was gone off into the war. Another main theme in the book was violence. Readers are really opened up how the war just doesn’t affect the soldiers it affects everybody.

The town of Redding (which is the town Tim is from) is affected a lot because they have a lot of cattle and the soldier need it because there hungry.

My Brother Sam Is Dead by James Lincoln Collier is available for checkout from the Mission Viejo Library.