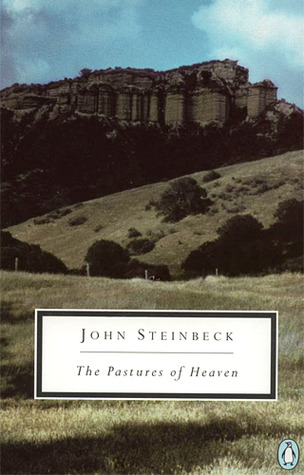 There was once a place called The Pastures of Heaven near the Salinas Valley in California. All the stories of different people in John Steinbeck’s novel occurred right here. I really loved the transition of characters that the author made, he didn’t just stick to one main character and extended the plot but instead, he included many other characters as the story proceeded by.

For instance, in the beginning, the Battle family was introduced first but when the Munroe family appeared, it wasn’t disconnected nor it is a tangent. Every character in the story seemed really realistic and like real life, have their own personality.

Edward Shark was his moniker, but he overly protected his daughter, I can certainly understand a dad who loves his daughter, but in this case, this love exceeded the love a father provides for his daughter. Imagine if I was the girl, Alice, I would be escaping away, but she was obedient about every dictation that Edward gave it to her. I was really fond of this book’s character and how the author connected all the characters that weren’t related at first.

The Pastures of Heaven by John Steinbeck is available for checkout from the Mission Viejo Library.

This is a story about Tom Joad and his family immigrating to California. Their homeland in Oklahoma is being cultivated by tractors from the bank and the police officers beat them to hell more often than breathing.

In this miserable and harsh trip, their grandparents died, and Tom’s sister’s husband ran away. His brother wasn’t able to move with them so he stopped at a desert in the middle of the trip. The government camp provided hot water and the protection away from the deputies. But other times, people are treated akin to pigs, but without the slosh their owner pour in the mange every day. The people craved for slosh but found none.

To me it’s really inscrutable why people separate from their family, it’s like the fear will devour you into the black hole in the galaxy and the entire world fades away from your fingertips. And the bank in this novel sounds brutal to me, just because they want to expand some business land, the people and tenants living there are forced to leave their beating hearts on the land and left with their inane corpse. Ma is the person that resonated with my emotions and logic because she was like the leaves of the family tree. Sometimes, when autumn comes she turns yellow and shrivels a little, but her greenness brushes the entire forest with freshness and was the food and shelter to a lot of people when spring emerges. Without the oxygen, we won’t survive. The animals and the oxygen is the buttress of the inveterate root to keep stretching. And that’s Ma.

John Steinbeck’s The Grapes of Wrath is available for checkout from the Mission Viejo Library.