Serafina wakes up to a drastically different world from the one she remembers. An old enemy becomes a new ally, while other foes become more deadly.   If Serafina doesn’t expel the evil force that is seething with rage from past battles, all of Biltmore, (the enormous estate within the Blue Ridge Mountains) and its inhabitants, will be destroyed.  Serafina must band together with her friends, old and new, to put an end to the enemy who cannot be killed before he puts an end to everything they love.

I loved this book and I wish it wasn’t the last in this series. All the books are so unique compared to the typical books you see today. The way the author describes the setting of majestic Asheville, North Carolina, makes you feel like you’re really there. This is an amazing book topping off a great trilogy and I definitely recommend it!

Serafina and the Splintered Heart by Robert Beatty is available for checkout from the Mission Viejo Library. 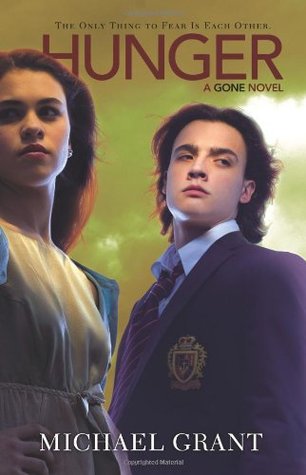 Hunger, written by Michael Grant, is the well written sequel to Gone. In the first book, everyone above the age of fifteen disappears. The other kids, fourteen and under, need to survive. But, when the kids have their birthday and turn fifteen, they have a choice. They could either step out of the FAYZ (the area where all adults have disappeared) or they could stay. In Hunger, Sam and his friends decide to stay, and now the kids are running out of food, water, and are on the brink of death.

I really enjoyed this book; especially because of how suspenseful and gruesome it is compared to the first novel. Even in the first chapter, a innocent boy dies to a swarm of mutated worms that burrow into his body. This was a thrilling start to the book and kept me on edge throughout the novel!

Beside food shortages, Sam’s evil brother Caine is back and wants revenge. In between books, Caine has been visiting a dark creature. It has been living under ground in a mine shaft waiting for someone to find it. In order to survive, the Darkness needs  radioactive substances. Caine goes to the power plant, takes it over, and then takes the Darkness its food.

In the climax of the book, Sam and his friends try to stop Caine and the Darkness. Surprisingly, Caine ends up betraying the Darkness and burying it in the mine shaft! Sam and Caine part ways and the kids discover a way to produce food by fishing and farming. I really enjoyed this book, especially with all of its surprising twists, deaths, and an all around great story line.

Hunger by Michael Grant is available for checkout from the Mission Viejo Library.

From this beloved author we were told how Lewis Carroll wrote the stories wrong: how Wonderland is actually not a child’s world, but one of twisted madness, Tim Burton like worlds, and hot guys who wear hats and vine like tattoos. Now, get to learn that we also have a beloved opera that has been written wrong.

Enter into a world based in France, where the school Rune Germain has transferred to has its own Phantom of the Opera. Rune’s life is complicated: she was almost killed by her grandma, nearly killed a boy by kissing him, and on top of all that, her voice was cursed, causing her to let out faint sounds every time she sings. Meanwhile, young Thorn lives with a man named Erik, who is the phantom of the opera and has mask covering the burnt portion of his face. Thorn must do what Erik says, even if it is wrong, for reasons kept secret. What happens when Rune and Thorn’s destined fates cross? A lot basically, and not all of it good.

I love A. G. Howard as an author, especially with her Splintered series. That was why, since I saw the book at the library, I immediately picked it up and started to read it. The cover and colored ink on the inside looked very similar. Although not the same madness like tone that the Splintered series was written in, the mystical feel suits a archaic opera like time. The plot twist is also very interesting.

However, the book disappointed me in various ways too. For example, A. G. Howard, like always, expects you to remember the mysterious boy that appears in the girl’s dreams, the one that only appeared for one sec in the beginning and was not memorable enough. Additionally, compared to the Splintered series, she tells the story really fast. This is also more of a preference, but I didn’t like the way she told the story. She told the story through both Rune and Thorn’s point of view, and while both are important to the story, I feel as though it muddles things up. However, that is more personal. All in all, it was still a very great story and I would recommend it to everyone who wants to read it cause of the author, supernatural elements, or the like.

Roseblood by A. G. Howard is available for checkout from the Mission Viejo Library.

There is a recently-added feature to the YA section called “Allen’s Pick”.  And, as I was walking through the library, I spotted this little tag and decided to give the recommended novel a try.  Little did I know it was the perfect kick-off to my summer, fulfilling my favorite three genres:  historical fiction, fantasy, and mystery.  Though the main character, Evie O’Neill (a Diviner, herself), and I got off on the wrong foot, I soon began to fall in love with her charming wit and Bray’s use of decadent literature.

The year is in the 1920’s where 17-year-old Evie O’Neill is performing her party act in front of her slightly drunk friends.  She asks for a person’s possession.  She touches it, falling into a deep trance before delivering the verdict.  In one case, she uncovers one boy’s secrets.  Without thinking, Evie spills, causing quite the uproar and later the punishment of moving to live with her mysterious uncle in upstate New York.  While Evie’s parents believed they were sending Evie to her mortal hell, the star-struck-wannabe-flapper was cooking up something entirely different.

I thoroughly enjoyed Bray’s novel, for its language, plot, and musical references.  She certainly did her research, finding what a teenage girl in New York in the 1920’s would be doing with her life.  I even had to google ‘Libba Bray age’ to make sure she was not 108 and therefore was not 17 years old in 1921.  Bray then went on to write a sequel to the Diviners, entitled, the Lair of Dreams.  Next time you visit the library, I would definitely recommend looking for the “Allen’s Pick” tag, and try a new read!

The Diviners series by Libba Bray is available for checkout from the Mission Viejo Library.

Mirage by Kristi Cook is the sequel to Haven, a mystery romance novel. Violet McKenna is 17 years old and going to spend her senior year at Winterhaven with her friends and vampire boyfriend Aidan. She spends her summer break at home in Atlanta away from Aidan to catch up with her best friend, Whitney. Dr. Byrne helps Violet with her visions and a transfer student, Tyler, appears in Violet’s life as well as other new characters throughout the book. While Aidan is finding a cure for his vampirism, a vampire killer is on the loose killing innocent people leading him to find out who it is. Violet starts getting visions throughout the book about what the future holds. Do you think Aidan will find his cure? Will Violet and Aidan end up together? Well you have to read the book to find out.

I definitely recommend this book to anyone who enjoys books that involve vampires, school life, and friendship. If you enjoyed the first book, then this book is a must. This book was a good read in my opinion and it was interesting with the intense plot twist and secrets being revealed. I love the new characters involved and Violet and Aidan’s relationship. There is a sequel to this book called Eternal and it’s the last book in the series.

Mirage by Kristi Cook, and the rest of the titles in the Haven series, is available for checkout from the Mission Viejo Library. 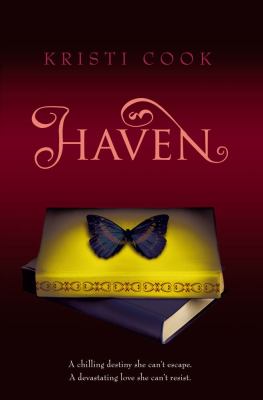 The first book in the Winterhaven series, Kristi Cook’s Haven is a mystery romance about a 16 year old girl named Violet Mckenna  and her journey throughout her new life at Winterhaven. Back in Atlanta, at school Violet was known as a freak because she sees visions of her dad’s murder. But, later she goes to New York with her stepmother Patsy and goes to a new boarding school called Winterhaven. Winterhaven was not just an ordinary school, but a school filled with secrets and students having special psychic abilities or “gifts”. Violet meets a small group of friends and she finally finds a place where she seems normal. At school, she meets the most popular guy in school named Aidan Gray and they start developing feeling for each other. While Violet dated Aidan she noticed he’s keeping something away from her. Aidan has been keeping a secret that none of the students know about and later on revealed that he was a vampire. After that there’s a plot twist where there’s a spin on a tragic event that happens to Violet and Aidan relationship.

I would recommend this book if you like mystery, paranormal, romance, and friendship involved. I like the build up towards the middle till the end and it has an interesting plot twist involved. If you like the book Twilight, then this is a spin on that book with a different plot twist that involves vampires and a bit of werewolves. In this book, you can see the journey Violet has taken in her stay at her new school and getting to know her new friends. There is a sequel to this book called Mirage.

Haven, and the rest of the Winterhaven novels by Kristi Cook are available for checkout from the Mission Viejo Library.