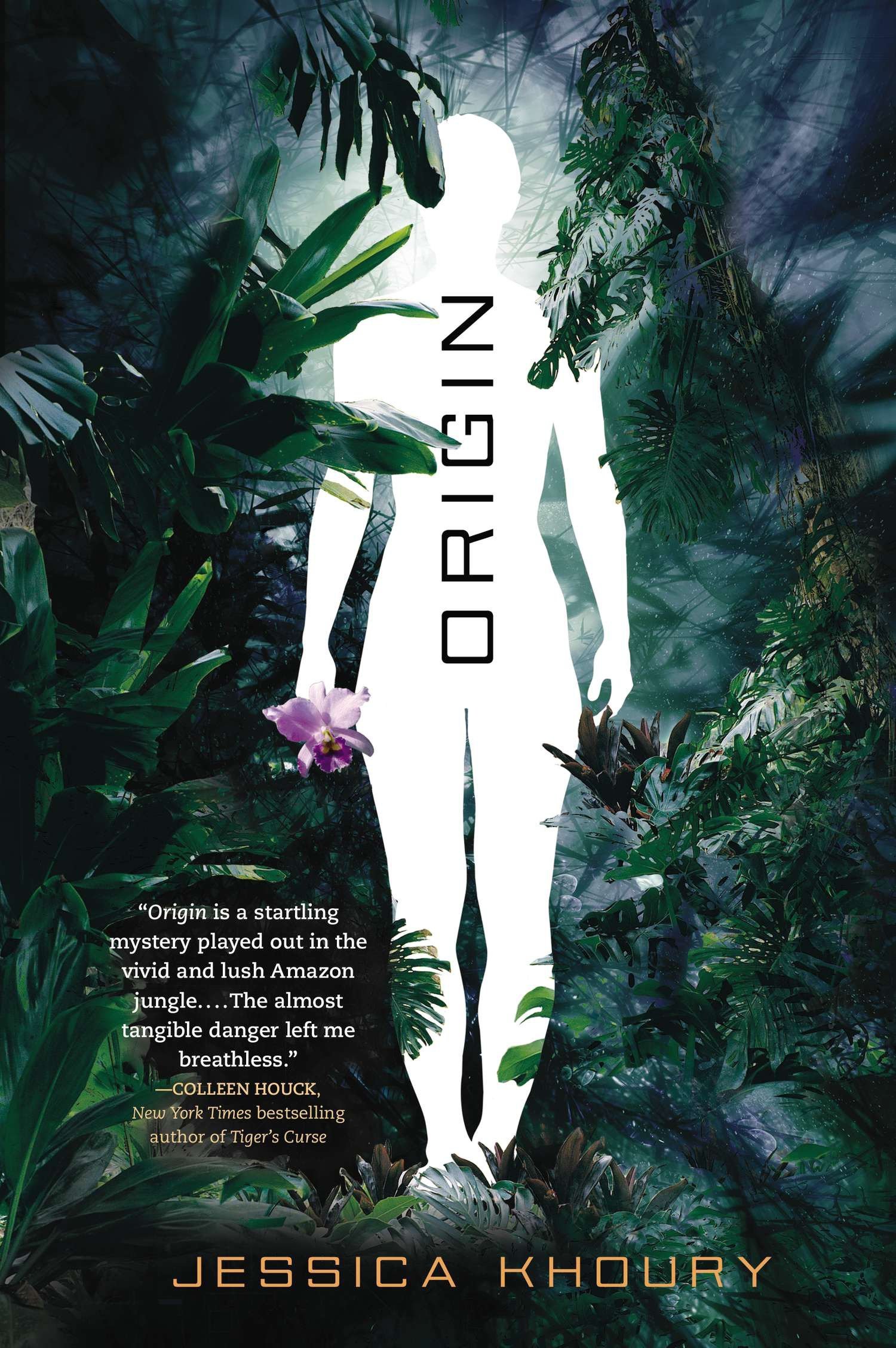 Origin is a wonderful read for any fan of science fiction and romance. Based in the depths of the Amazon jungle, you will get immediately swept into the world of labs and scientists. The main character Pia, is considered perfect, because she is invincible, one of a kind, and extremely smart. At 16 years old, the only people she knows are her family, a team of scientists, and the non-scientist residents on the secret facility called Little Cam. With five generations and a magical flower found deep in the Amazon jungle, called Elysia. But Pia has to be kept on complete lockdown and doesn’t get most types of entertainment, like books magazines, or movies, unless they are science textbooks, with blackened out paragraphs. She hasn’t even met anyone under the age of thirty. But this all changes when she’s able to escape Little Cam, and meets Eio from a local village. They start to fall in love, but the risk of deadly consequences grows more.

I own this book, and I’m really glad that I do. It’s one of my personal favorites to read over and over again. It’s such an amazing secret world to fall in love with. The first time you read this book, you’re constantly wondering what happens next, and if Pia will ever be free from all the restrictions.  I highly recommend this book to anyone looking for a new read.

The year is 2044.  The Earth is in ruins and people are starving, all because of the energy crisis and human neglect.  Humanity’s escape from all that is the incredible virtual reality game called OASIS. It was created by the genius video game creator James Halliday who, when he died, set up a contest to find the Easter egg he’s hidden in the grand OASIS. Whoever finds it will get Halliday’s inheritance, which is an enormous sum of money.

This story follows Wade, an introverted, awkward boy who has grown up with the OASIS. His parents died while he was young, so he’s forced to live with his cruel aunt in a precarious tower of trailers.  He spends his days finishing up his last year of high school and mostly researching every 80s TV show, comic, movie, and book for clues on how to find Halliday’s egg.

When Wade begins to progress in the hunt for the egg and find the first key, he receives a lot of attention and soon becomes targeted by the IOI, another game company who wants to win the contest so they can steal the OASIS and change it. Wade must find the egg before someone else or the IOI can to save himself and possibly the world.

I really enjoyed this book!  It’s so interesting because of its futuristic, sci-fi genre and many, many references to games, books, TV shows, and movies. This is a unique, fascinating book that will have you turning its pages rapidly till the end!

Ready Player One by Ernest Cline is available for checkout from the Mission Viejo Library.

“Voltron” is a name that may be familiar with people of many different generations. It was most noticeable for its original debut in the 1980s under the show titled Voltron: Defender of the Universe, however it has had many revivals over the years with…generally subpar success to their names.  But its most recent incarnation, Voltron: Legendary Defender, quickly shot up in popularity when Netflix announced it in 2016.  So what was all the hype about?

Voltron: Defender of the Universe brought up dark subjects with children that other, similar cartoons would often avoid. It was still incredibly corny, of course, but it left a lasting impact on its young audience because it didn’t shy away from these topics.  Needless to say, Voltron: Legendary Defender had a lot to live up to.  If it couldn’t impact old fans and new fans in a similar way to the original, it would fade into obscurity like the reboots before it.  So was it impactful?  Did it live up to the legacy of the original show?

Over the next few months, I’ll be taking a look at this reboot season by season to see if it’s worth all the hype it received.

Season one of Voltron: Legendary Defender is very simplistic, but sets up a very interesting world with its eleven episodes. From the first episode – which, to be fair, is an hour long without commercials, so it does have a lot of time to make a first impression – you can immediately tell the tone that this series wants to take.  The opening scene literally depicts the kidnapping and torture of three innocent human astronauts.  Immediately after, though, we cut to the antics of three in-training space cadets: Lance, Hunk, and Pidge.  This may sound contradictory but the show is very good at balancing the serious moments with the more lighthearted moments.

The Galra Empire is an empire that has spread its reach throughout the universe for thousands of years, and they have conquered almost every planet up until the Milky Way. Their leader, Zarkon, grows stronger with every planet they conquer, and the heroes are racing against time to defeat this big baddy.  This is the premise of the show, and the turmoil and politics of the Galra empire are a major plot point within the series.

The story of this season ends with quite a bang as well. The heroes take a rescue mission right into the heart of Galra territory, and face off with Zarkon himself.  Although they’re able to escape, they don’t escape without taking some heavy damage first, and the season ends on a dramatic cliff hanger.  It’s a cheesy way to rack up interest for the next season, but it works.  So does the series fulfill its enticing premise and current potential?  Tune in next time to find out!

What if you lived in a world where illness or disabilities weren’t the problem? An old war veteran could get a new hand, a paralyzed person could replace their spine, a blind man could get new eyes. But all these parts have to come from somewhere, right? What if your parents didn’t know what to do with you, didn’t want you…could unwind you? Your body parts could be useful to another person, if it felt like you weren’t making adequate use of them. When kids prove to be too troublesome or just useless to their parents, their parents sign a form to have them unwound. This way they can be made useful. And if you don’t prove your worth, it’s off to the harvest camps.

Connor, Risa, and Lev are brought together by chance and kept together by desperation. Connor is too much of a troublemaker and Risa is an orphan. The costs are too high to keep housing all of them. Lev has been an unwind, or tithe, since birth as part of his family’s strict religion. These three unlikely companions make a life-threatening journey to save their fates. If they survive until their eighteenth birthday, they can’t be harmed. But when every piece of them is wanted by a world gone mad, eighteen seems very far away.

This book is a real page turner. It had me on the edge of my seat, anxious to see what was going to happen. The reader has to have a good memory of things that happen in the beginning of the book, because although they don’t seem important when they are mentioned at first, they tend to play a big part towards the end. I love the way Shusterman writes, making sure the reader is paying attention throughout the story and adding twists in the story that you never see coming. My friend recommended this book to me and was so happy when I told her I was reading it. Thanks to her, I have a new favorite series. The next book in the series is UnWholly, but you might also want to check out the short story between the first and the second book called UnStrung. This book is definitely in the top ten for best dystopian series.

Unwind is available for check out from the Mission Viejo Public Library.

I Become Shadow is a story about a society called F.A.T.E. Now, I forget what that stands for, but it’s basically a government agency that captures children at the age of 14 and trains them to be human weapons. Once these kids become fully trained Shadows at age 18, they wait until they are assigned to a “link.” Links are people who will one day make astonishing breakthroughs in science and technology and indirectly protect them until he or she makes their discovery. These Shadows are there to see but not be seen, to hear but not be heard.

The story is told in first person by Ren, a girl and social outcast who is kidnapped and forced to become a Shadow. Following her training process, she comes to realize that it isn’t so bad, and that she is actually trying to become better. Excelling through all aspects of transforming into a human weapon, Ren is given her link: a college guy named Gareth. Because of certain circumstances, Ren is forced to make direct contact with her link, breaking the rules that define a Shadow. Over time, she becomes friends with Gareth, and encourages him as he creates a wheat seed that can grow without water.

While I was reading this story, I thought it would be cool to have the abilities that the Shadows have, but it wouldn’t be cool to be taken from my family in the dead of night at age 14 and forced to undergo 4 years of rigorous training to not be seen again. If you’ve read and liked this book, want to read it, or read something similar, post a comment!

I Become Shadow is available for check out from the Mission Viejo Public Library.